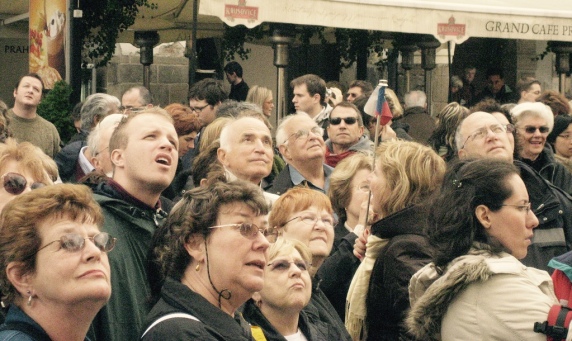 Etymology online gives a description for the verb “The etymology of Gawk” as follows:

“stare stupidly,” 1785, American English, of uncertain origin. Perhaps [Watkins] from gaw, a survival from Middle English gowen “to stare” (c. 1200), from a Scandinavian source akin to Old Norse ga “to heed,” from Proto-Germanic *gawon, from PIE *ghow-e- “to honor, revere, worship” (see favor (n.)); and altered perhaps by gawk hand (see gawky). Liberman finds this untenable and writes that its history is entangled with that of gowk “cuckoo,” which is from Scandinavian, but it need not be from that word, either. Nor is French gauche (itself probably from Germanic) considered a likely source. “It is possibly another independent imitative formation with the structure g-k” (compare geek). From 1867 as a noun. Related: Gawked; gawking.

I wonder what people might have gawked at in the late 18th century for the term to have come into usage. It might have been public punishments, such as with the public burning of Hugh Latimer in Oxford in 1555. Public violence against criminals and subversives is a topic that Michel Foucault attended to in the chapter “Spectacle of the Scaffold”. Alternatively, one could think of the magicians, fortune tellers and snake charmers in historic squares such as in Jemaa el-Fnaa. Much like contemporary tourists gawking at astronomical clocks in Prague (photo).

Needless to say, gawking is not a new human activity. It must be at least as old as the sentient visual life of primates. And, indeed, I wonder how much further back in the natural history of human biology that my claim would remain “true”. I doubt the human urge to gawk has increased or decreased very much over the years. Besides, to draw such a conclusion, we would require more than the evidence/context I have given above to develop a hypothesis to test. All we have are stories that people come together or on their own, stop to stare stupidly at things. And it is likely it was always the case.

What perhaps we might be able to infer, is the opportunities and availability of things to gawk at has evolved. And it has probably changed quite a lot quite quickly. So for instance, artificial light would have changed the opening hours of public squares and fostered more opportunity. Artificial light, and for it to be readily and cheaply available is a relatively recent phenomenon. Also, the invention of the television, and obviously, the spread of hand-held screens through the development of the Internet and high-definition streaming of data must mean some change. In the past, maybe people stared stupidly at the illuminated books they might have had in candlelight. In terms of the staring stupidly part, the frequency of this activity might not have changed much. What I think is different, is that, we can now gawk at an ever-increasing sample size of visual information.

I guess one might prefer not to use the phrase gawk in some circumstances. For example, when watching people reading their emails, it often looks like they are gawking. I am sure I do it too. It is rather strange that when people are concentrating on something that the observer can’t see, in this case a computer screen, might have difficulty distinguishing the attentive face from the absent face. On this note, I have disagreed with some friends and colleagues about the faces of students whilst they are listening in class. Of course, both teachers and students would prefer if everyone looked like they were attentive. But I have always been aware that one cannot always tell, unless one prompts the listener, if the listener were attentive at all. For teaching, prompting is key, for what is the point if one just yabbers away and the student is unable to follow.

The constant and routine activity of gawking at stuff in the digital world means that it is getting harder in certain aspects for teaching and learning. I have been persuaded that a more hand-ons, student-led teaching is the way to go. Even though, this is not so easy in the subjects of law. I think the era is gone, where people would, by the age of 18 (and heading to university) been trained to concentrate, listen, read, and all the while give feedback whilst they passively absorb information in classroom settings. nowadays, people are increasingly “autodidacts”. They can concentrate on screens over enormous periods of time, simply uploading information to their minds. Something tells me that in the 18 years before university, many would have done more of the ‘uploading’ and ‘concentration’ in front of a screen than in front of the person or a book. At least, based on what my students have told me. The one item that is constantly with them throughout their course is likely to be their smartphones. Not even friends, or textbooks. These other things are, in a way, transient in “real-space-and-time”, but simultaneously in the “virtual-joined-at-your-eye-socket”, these other things are available to the person through their smart phone. Or at least in theory, the person with the smart phone is connected to any friend or textbook they so wish.

But how does the screen or smart phone train the person to give feedback? I dread to think that the feedback is based on clicks or eye tracking only. comScore gives some information on the hottest and most popular websites for people in the UK here. Looking at the list and visiting the websites, they are rather immersive and expect people to click-through and stay on the data stream. They expect people to see ads, give up some of their personal information, spend money and so forth. I am not sure, this constant manner of interaction is really helpful for teaching and learning generally.

Certainly, all of these parameters are evolving. The optimum means of disseminating information, and implicitly as an educator I mean thoughtfulness as opposed to gawking, is somewhere between an illuminated manuscript and the mailonline website. What that might be is likely to be engendered with how people use and discuss their usage of digital media. The wealth of information seems to be winning the argument. I say winning in the sense that making everything available online and for constant stream seems to be the taken for granted option. The idea being that, one could do the viewing at their own convenience and speed. But, as it must be clear, I doubt if this could be the best way to learn. Says me, whilst contributing more stuff into the digital ether.

(caveat, this is blab post on a friday night. humour me)